Inflate quickly your capital with a duo of Wilds and re-spins ! 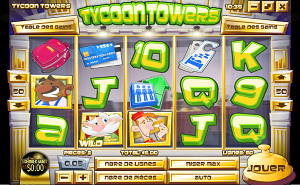 Rival Gaming’s online game publishers are further expanding their slot machine collection with this new title that bears the name of Tycoon Towers ! This online casino game available in demo and for free on casino-rival.com offers you the opportunity to be entertained with a number of 5 reels and 50 lines.

The features of this video slot recorded in the large collection of games of chance of the 3D casino Tropezia Palace include wilds, scatter icons and finally re-spins ! To animate the course of the game, you will be able to find all kinds of icons that relate to the lexical field of the hotel. As a result, you will often find a room maid dressed in black and white with her duster in her hand, a porter who looks forward to his tip by snapping his finger with her thumb and forefinger and other secondary symbols like a mafia holding a cigar firmly between his teeth or even credit cards with multiple currencies.

Tycoon Towers is a Rival Gaming slot that has made every effort to quickly export you into the lively topic with a starting cinematography that can no more illustrative than that. The goal is to make you understand where you’re going to put your feet. The two first qualifiers that the Tycoon Towers game wishes to reflect are lust and wellbeing. To do this, these two elements will be put in front of the stage and vitalized by millionaire grandad, who has the habit for many years to move only in limousine.

Unfortunately and strangely, girls with beautiful silhouettes will not be at the appointment. Not appearing to be really interested in the female rim, this ancestor will hold two large suitcases firmly. These are probably filled with bank notes. It is then that the small presentation scenario of the Tycoon Towers Silver game will finally take life by letting see at the outset the front of a famous palace in the world. Gildings, red carpets will be present to mark this prestige side that the main character of Tycoon Towers loves above all.

A few moments later, this famous car of several meters long will park in front of this huge tower that shelters the most beautiful suites of the world. Placed at the back of the limousine, the wealthy old man will initially drop his smoke window to make sure the doorman is at the appointment. Of course, this one will not fail to demonstrate its reactivity because the latter knows well the character who is a regular of the house. He knows as well that he has a lot of money and that his chances of getting a tip are very important.

It is then that this gentleman with the big whitish moustache will grab his two suitcases to rush into the hall of this sumptuous palace. The joy will be clearly visible on his face and the boy at the reception will be a second time to the small care to call and open the door of the elevator to this businessman.

In addition to allowing you to play with particularly neat graphics and with a soundtrack that deserves to honor the luxury side that wants to release the Tycoon Towers slot machine, you will have the opportunity to entertain you from €0.01 bet. An extremely small amount of money that can of course be revised upward with an adjustment of number of lines, coins and denomination values. At its maximum, Tycoon Towers will be in a capacity to enable you to activate features with €125.

Main feature of the online game with no-download Tycoon Towers is focused on wilds that will have the power to give birth to re-spins! The jokers are at first represented by the main character who is this millionaire businessman. When he is active on a pay line, he will not fail to know it by radically changing visual appearance.

Outlines of the icon will be dashed grey and red and in the center and still reddish color will be visible the word wild. The bottom of the symbol will remain transparent so as to get bored see the first visual of the wild is more colorful with the face of the wealthy old man. Once this little scenario has finalized, a re-pin will be born to let see more or less important prizes. During this time, the wild icon will remain frozen on its site, always having its power of substitution in the hands.

Two cases will appear to you. Tycoon Towers will leave you the choice to continue with a new re-spin in the event that 1 or more wilds show up again on the screen. Otherwise, by not seeing any other joker on the horizon, the wilds/re-spins feature will suddenly end. By definition, you will be suggested to revive the game of Tycoon Towers by injecting a new bet between €0.01 and €125.00.

During the course of the main game and during all the action process that we have just seen with the function wilds/re-spins, it will be possible for you to play with a second option. The latter is focused on scatter illustrations. Identifiable by a sign with a green arrow that probably indicates a gathering place of people, the scatters will be able to give you casino chips from the moment when they appear at least 3 times on the screen. At their peak either by presenting themselves 5 times, they will allow you to pocket the equivalent of 300 coins ! 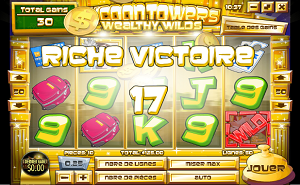 Tycoon Towers is according to the administration’s opinion an online casino game that is pretty friendly to browse. We liked this trailer that carefully traces the daily life of this old millionaire. We are quickly captivated in the game and the features announce a rather different configuration than we have already discovered in the content of other Rival Gaming online slots.

We especially liked this setup with this duo of Wilds and re-spins which are by definition free spins. Scatters are also a good complement to the acquisition of tokens to be able to remain (profitable) at the level of its injections of bet. We regret the absence of a bonus game. This would have made it possible to further finalize the Tycoon Towers money game but the latter is still a good game of chance Rival Gaming.