Activate free spins with the help of a genius ! 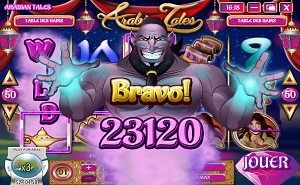 Posted on February 19, 2015 the slot machine titled Arabian Tales is a brand new kind if we compare it to the previous achievements of the publisher Rival Gaming. This video slot which remains available without downloading from the site has 5 reels and 50 lines of payment can be activated.

It is with a sustained number of lines that this casino game lets its players discover multiple features such as jackpots, free spins, gain multipliers, scatters prices and finally multiple jokers. Arabian Tales embarks its users in Saudi Arabia. At first, this slot machine gives us the pleasure of visualizing a cinematography with a beautiful staging in 3 dimensions. The presentation allows us to see a sublime temple damn well kept.

The characters in this story are a genius who will have a sense of generosity during the free spins. A princess having as a pet a poisonous snake. A guardian who takes pleasure in slicing those who approach too close to the temple. A Bengal tiger who spends most of his time hiding in bushes and other secondary symbols such as a magic lamp or a flying carpet. As the three-dimensional video slot named Arabian Tales can let us predict, the general atmosphere is absorbed both by a magical atmosphere, well-guarded wealth and violence.

The online game Arabian Tales has in the first place 5 reels and 50 pay lines. These latter will have the possibility of being able to be active again between 1 to 50. That summarizes therefore to a free choice for the users. Other than this feature, this online casino game with no download has three options that offer the opportunity to different players tobe able to bet from €0.01. At most, it will be possible to bet €125.00 by rotation.

To be able to define a specific amount of money before launching the 5 reels, it will be possible to choose a level of room (1 to 10) which will be grafted on the lines of gain activated. The last option is based on naming values. The game Arabian Tales ask to choose one between €0.01 and €0.25. Once the settings are validated, simply activate the game by clicking on the button (Play). It is important to know that the starting bet will be subject to change before each new start.

One of the first features of the online game Arabian Tales concerns multiple jokers. These are illustrated by a magic lamp that lets us think strongly of that of genius in the story of Aladdin. This option will have the principle of substituting all the icons that form the game set by the scatters symbols. Multiple jokers can manifest themselves on the 5 reels of the slot machine with the particularity of having the expandable option. This advantage allows this function to be more powerful in its redistribution of earnings by having goal to complete the full height of his landing reel. In addition, all prices generated by this feature will benefit from a multiplier of 2.

The second option of this Rival Gaming Slot Machine is based on jackpots. These latter can have an overall influence on the game having the particularity of being able to be active on all areas of the game. These are represented by an old man with a long graying beard. He has a smile on his face and a cup of wine in his right hand. The goal of the jackpots is to distribute lots of tokens more or less important. The size of these coin packs will be influenced only by the number of jackpots on the screen. At most, it will be possible to win 2,500 coins in the specific case where 5 icons of this old man appear on the interface of the slot machine.

The scatters are also in the game with an illustration of a Bengal tiger. This latteris strange enough in his behavior because he has as a hobbie to hide behind bushes. The Rival Gaming publishers sometimes put extras from their slot machine games intomore than weird situations. Anyway, scatters earnings work the same way asfor jackpots. That is, lots of coins. At most, it will be possible to win the 50 coins by getting this tiger 5 times on the screen.

The latest feature of the Arabian Tales video slot is focused on free spins oralso called free spins. To be able to enter this function, it will be asked to gather at least the equivalent of 3 icons of engineering. Once activated, the free spinswill export you to another page of the slot machine. You will be in the basement of the temple. To be more precise, you will be present in a huge room full of wealthes. It will be possible to see background montages in the free spins process. In addition to collecting chips for free and being able to play at the same time with allfeatures offered, The Arabian Tales 5 reels slot machine will take the opportunity to multiply by an index of 3 all the prizes that you will collect along the way. 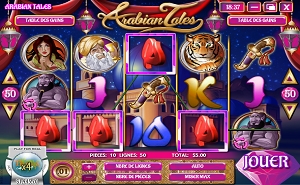 Our opinion for the online game Arabian Tales generally positive. The only thing we regretted about the configuration of the game is that it does not have a bonus game feature. We would have enjoyed a duel with the genius who we think is the character that opens access to the most important gains of the game. For example, in this special level we would have appreciated the fact of being able to ask the genie to grant our wishes and finally to be able to collect lots of random tokens. Is a genius used for that ? Other than this missing detail but which does not spoil either the general atmosphere of this slot machine, we particularly liked the staging of the game.

With three-dimensional graphics, the Arabian Tales video slot has a rate of redistribution of his bets more than adequate. Now that you know our opinion personal about this online game Rival Gaming, we can only suggest that you test by yourself.