Will the Queen manage one day to find the smile? 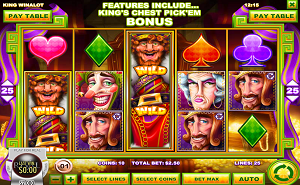 Rival Gaming provider offers a slot machine with 5 reels, 3 rows and 25 adjustable payment lines that takes us to a medieval castle with King, Queen, Princess, Jester, gold, etc. Therefore, a good cocktail to come and amuse the gallery and try to enrich us at the same time. Three features King Winalot stacked Wilds, King Chest Pick’em Bonus and Prince Free spins will lead us to the path of fame.

In King Winalot™ Castle, there’s going to be a party! The Queen is in the midst of depression and the king wants her to feel better. No one knows what to do! They tried everything and he even asked the doctor at the palace what they could do. The Queen had a weird face. A mixture of melancholy and on the other hand it looks like she’s angry with the world.

They called the jester of the kingdom next door, because according to his buddy King Rigolotus it was the best.

So all the nobles of the other kingdoms were invited. It was going to be great! The princess, daughter of King Winalot™, was very happy to see her friends the princesses of other kingdoms but the one who exult with joy was the prince : He was going to be able to drink like a hole because knowing his debility for alcohol he was not allowed to booze if it was not on the occasion of parties.

Everyone is at the appointment because the animations among the Winalot were very listed: at the exit for all the present the king had to distribute a small bag of gold coins simply to thank them for coming. Everything goes perfectly but the queen goes on without sketching a miserable smile… Until the drunk prince like a barrel begins to imitate the jester!

That’s when the miracle happens: the Queen and the rest of the participants explode laughing! It was too crazy to see him fooling around. It was really ridiculous but the goal had been achieved: the Queen Mother had laughed. Why go so far to fetch a buffoon if they had it at home? Never again did the Queen feel sad or angry.

The game begins… The door of the castle opens and leads us directly to the treasure room, gold coins that leap from everywhere and seem to have no end. The winnings will be effective when the paid symbols are displayed on an active payment line. The symbols must be consecutive starting from the left, the payment will be determined by how many symbols appeared and also by the denomination values of the coins.

The wild symbol represented by the king if it expands 3 squares high then the feature of the stacked wild will trigger and this symbol will substitute any symbol to be able to form a pay line when possible. The second feature Prince’s Free Spins will activate when the Prince symbol is found 3, 4 or 5 times on the reels and rewards 7, 11 or 21 free spins respectively.

The third and final feature of the King Winalot™ mobile slot machine is the King’s Chest Pick’em. If the Bonus symbol represented by a lock and a key appears 3 times or more on the reels the feature will activate and we will be able to see what we have won, we will have to open the lock to get our reward. Only the highest win will be paid per line and all winnings will be multiplied by the denomination value except the scatter. 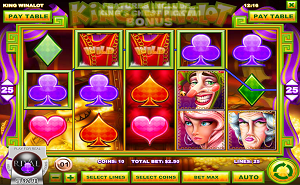 Rival Gaming provider offers a slot machine with 5 reels, 3 rows and 25 adjustable payment lines. The theme of the Middle Ages is very popular among the provider of good renown, but here it must be said that it is a little weak. One can bet from 1 to 10 coins per line, the value of the coin can go from 0.01 to €0.25 which can make us a total bet of 0.01 to €62.50: the fan is pretty good.

The bets start quite low, which is good for players who do not have a big budget, for beginners who do not know too much the world of slots, it will make happy! As for the big gamblers it is not frankly made for them, because they are accustomed to make more important bets to win larger prizes, but that is the choice of each!

Now let’s talk about features: There are three King Winalot Stacked Wild, King’s Chest Pick’em bonus and Prince’s Free spins. Simple features, all corny that do not motivate the player frankly. After playing a good time in free mode I did not happen to trigger the Chest Pick’em Bonus and I can assure you that I have played!

The variance is quite low but what worries me the most is that the return to the player is not indicated anywhere: I don’t like it at all! Why hide it from the player? I think on this point the Rival Gaming provider is wrong but it’s his choice. He knows what he has to do… In addition, Autoplay mode is not allowed in fun mode: another big mistake! Many players enjoy this game mode, and certainly they want to try all the modalities before they embark on real money.

The provider does not stop throwing in the game, small frames that tell us or try to direct us to the real money mode. You want my opinion? It’s really boring, the player who wants to go to the real money mode does not need to be gunned down with frames during the game to direct it. He knows how to go by himself, and I think it can have a negative effect on the player’s mind, at least that’s how I feel.

I’m really disappointed with the Rival Gaming provider and its King Winalot™ game, it’s accustomed us to really better games but this one is not one of my favorites. Even the characters are almost ridiculous. In any case it is necessary for all tastes and certainly that this online casino game will appeal to some players so the best is to try it to be able to leave his opinion afterwards.