Luck can even smile at the homeless ! 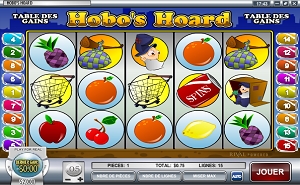 The Hobos Hoard slot machine is a variant that is powered by the famous online gaming provider Rival Gaming Powered. This creation has 5 reels and 15 pay lines. Its theme is quite special, you will immerse yourself in the body of a shelter. As we know, the life of these people are not very happy and we feel like a pinch to the heart when we see them in the street. With Hobos Hoard, you will know in the smallest details the daily life of a tramp. The latter is of a medium body size with a long and grey beard that hides his mouth. He is wearing a piece of blue cloth and he owns a bundle where he stores the few items he has.

His habitat is a cardboard that he also walks with it. During this story, you will be traveling through a city where the population seems not to be here. There is no traffic in the streets and the homeless is looking desperately looking for a satisfactory place to try to collect some coins in exchange of his presence. That’s when he walks and go on walking constantly releasing a very sustained nonchalance. The poor man trained misery under his feet and he is so tired. His pockets are empty as well as his stomach and he doesn’t know what to do. Suddenly, he sees a whole group of people under a bus shelter and he thinks himself that his time to collect some yellow coins and some notes for the most generous is very close ! The pupils of his eyes are going to metamorphosed in a second in the motto of the dollar.

Cinematography stops in this action by letting you guess that it’s up to you to play to pocket a maximum of profits. Rest assured, the Hobos Hoard slot machine is not stingy and it will be particularly generous with a lot of features that we let’s take care to detail in this review of the Hobos Hoard online game.

The Hobos Hoard slot machine allows players to play money from a range of bets based between €0.01 to €75.00. The 15 lines of the machine can be activated manually from 1 to 15. Coins values are also available to activate between 1 and 5. Finally, you will be able to make it possible to set up denomination values that are accessible between €0.01 and €1.00.

The wild is a gaming option that will give you the benefit of creating a winning line while the latter in its current state would not have been in the possibility of using it. Yes, this is the wild’s role of acting as a substitute for symbols. In this way, he has a great power to facilitate the formation of a pay line. In addition to having this ability in him, he will also allow access to batches of coins. At most, by getting 5 times the wild, you will be able to pocket the sum of 7500 chips ! Finally this option of replacement of icons and illustrated by a bin with aluminum lid.

The mini jackpots of the free Hobos Hoard slot machine are identifiable by two representations. The first is the face of the homeless with his pupils that have been replaced by currency in dollars. The second symbol still represents the main character of this adventure but this time, you’ll see it installed in a big box to spend the night. Finally as he can… Just like the joker, the mini jackpots will aim to credit you lots of coins. For example, by getting 5 times the face of homeless, you’ll get 750 chips !

The free spins of this online game are clearly illustrated by a can of coca cola. The only difference is that the writing lets see the term (spins). By managing to gather at least 3 icons of this style, you will instantly activate a number of 10 free spins ! Concerning this Hobos Hoard game option, the earnings multipliers will be noted to absentees.

The last feature is a bonus game that will complete the break of the cinematography of departure. First of all, you will be asked to gather on your game interface 3 bonus symbol. Once you get that, you’ll integrate the phase of the bonus level. Shortly after you will be facing a bus shelter where 5 people are waiting impatiently to return to their homes. Your goal as you play the homeless is to beg by asking for money or ate at these different people. 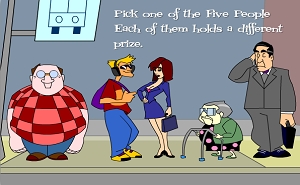 Hobos Hoard is a free slot machine that has a large number of features. This result in close actions during your session with a redistribution of earnings that follows this step. Despite this, we were disappointed by the presentation of the bonus game that is pretty basic. In addition, it is just possible to click once which leaves little chance to win a big prize.

The prizes are present but the fact of being able to click 3 times on the characters would have been appreciable. The soundtrack does not really match Hobos Hoard’s theme. While the cinematography is original but once in the heart of the game, the sound changes for to hear a hubbub of land-based casino. We are in town so why such noise ? We should rather hear the sounds of vehicles as well as the life that a city with all its traffic jam. Other than that, Hobos Hoard is still an attractive slot machine as a whole and we invite you to put it in operation.