Wrath of Medusa™ animated by a close but ultimate battle that will be the dominant of the battle? 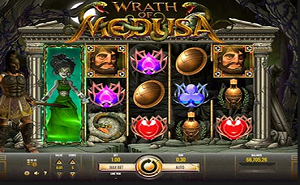 The two marine deities Phorcys and Ceto had three daughters, the Gorgons. Steno the strong, Euryale the wandering through the world, and finally Medusa the cunning. These sisters were famous for their dazzling beauty especially Medusa, who possessed exceptional hair. The characters are as beautiful as in Scary Rich 3™.

Poseidon, god of the sea, fell in love with this beauty and joined her in a temple dedicated to Athena. Considering it an insult, Athena decided to take revenge and turned the Gorgons into repulsive monsters. Their hair was transformed into a swarm of snakes, their mouths were endowed with wild boar tusks, their fingers were replaced by bronze claws and wings with gold scales pushed them down their backs.

From that moment on, the Gorgons were feared by men and gods because anyone who crossed their gaze was immediately changed to a stone statue. Yet Perseus, sons of Zeus and Danae, eventually defeated Medusa, without being petrified. Guided by the Gorgon sisters, the Greas, Perseus found the place where Steno, Euryale and Medusa resided.

It was then that Athena and Hermes intervened to help Perseus. Athena guided his hand and lent him his polished shield like a mirror so that Perseus could see the reflection of Medusa without being petrified by his gaze, and Hermes offered him a sword that did not break. Thanks to these aids, he manages to cut off Medusa’s head. She was pregnant when she was decapitated, and from her blood the sons of Poseidon, Chrysoar and Pegasus, the winged horse, are born.

Perseus, who wanted to pay tribute to Athena, gave him the head of Medusa, the Gorgoneion. Athena adorned her aegis with this magnificent gift. According to legend, Athena gave a strand of Medusa’s hair to the city of Tege to protect her. Indeed, Medusa means in Greek (the one that protects).

Asclepios, god of medicine, used Medusa’s blood to treat his patients. But the blood from the left side of Medusa (left vein) was a violent poison and the blood from the right side possessed powerful healing powers to resurrect the dead.

Wrath of Medusa™ is the product of a 3D slot machine that the provider Rival Gaming Powered released on May 24th of 2020. There is no data yet on the volatility of the game and the percentage return to the player. The list of symbols includes Medusa, warrior, shield, coins, helmets, vases, swords, snakes and other traditional objects. Epic music is the soundtrack to this action.

There are five reels, three rows and twenty fixed payout lines for this story, as in the game Diamond Dragon™. Each of Wrath of Medusa™ lines can hold between one and ten coins. The coin can be worth between 0.01 and €0.25, which makes a turnover cost between €0.20 and €50. Medusa is the Wild card. It appears on the second, third and fourth reels, and develops randomly. In addition, he acts as a substitute and pays up to 250 times the line put for his five-in-one combination. The warrior you will assume is Perseus, is the Scatter.

Collect up to 500x online for a set of five old coins. The value of crossed swords reaches 100x the line bet, while a unique snake combination pays 75x. The bows and shields will pay up to 60x and 50x for the line bet, respectively. Swords and vases are worth 40x and 30x. Helmets pay no more than 25 times the line put for their five-in-one suits. Earn up to 10x for one of four combinations.

As soon as a scatters game unlocks free spins of the Wrath of Medusa slot machine™, the Scatter turns into a Sticky Wild card. Before the start of the tour, you will have to choose a favorite stone warrior. In addition, each Sticky Wild can activate respins. This will be all the more rewarding!

Opinion about Wrath of Medusa™: 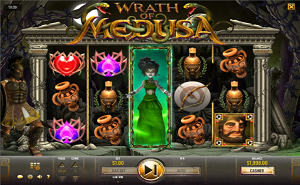 The story takes you to a dark cave where Medusa, a monster disguised as a woman, waits for his next victim, or not? Maybe it’s the warrior who’s coming to the end of her! Jellyfish’s deadly and petrifying look has become the inspiration for this 3D game of this Rival Gaming Powered provider that doesn’t release a lot of games. On the other hand, who still tries to keep a certain quality on his casino gambling titles on the internet.

The free money game Wrath of Medusa™, as in all Rival Gaming Powered games, and especially in Zombiezee Money™ shares fantasy and horror. This is a machine that will offer winnings although not very high will be quite frequent. Bets will go from €0.20 to €50 which is not bad because it includes virtually all players.

The graphics are very neat and the soundtrack very disturbing which will make a mix that players will enjoy. Well-marked visual effects and sneers from time to time will set you in the mood. It must be said that the Rival Gaming Powered software has not accustomed you to such beautiful images. The fight will be merciless and will offer you good entertainment!