An orca and a dolphin to accompany you in your game! 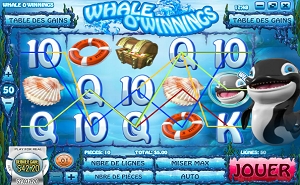 Whale O ‘ Winnings is a Rival Gaming Powered slot machine that is built of 5 reels and 50 pay lines as is the case for Tycoon Towers. During this adventure that promises to be rich in action and in obtaining prizes, you will be present in the depths of the Pacific Ocean! It is in the warm waters of this place of the world that you will enjoy to make friends with two protagonists who are an orca and a dolphin. These two mammals reflect the joy and this stands out clearly in relation to their multiple expressions that they had draws on their faces.

The places of Whale O ‘ Winnings are full of details with 3 dimensional representations. In parenthesis, if you like the games of aquatic online casinos, we strongly believe that the variant Lost Secret of Atlantis should surprise you in front of its decorations that are of a surprising quality. The options are not lacking in the call with a breathtaking bonus level !

During your game session you will be able to play with lots of performances. The latter are oriented on a life buoy, a sea urchin, a sea lion, a safe, a scallop and many other illustrations that we will let you discover by yourself. In order to add real dynamism to your various games, the game Whale O ‘ winnings offers you to make active jokers as well as free spins!

Whale O ‘ winnings is an online game that as we had announced at the beginning of the review is composed of 5 reels and 50 pay lines. These can be active between 1 to 50 and this before each new rotation of the reels. In addition to allowing you to play with a fairly number of lines, this slot also allows you to be able to fix between 1 to 10 coin(s) on each of the pay lines you have activated. This is not over since the configuration of Whale O ‘ Winnings also gives you the opportunity to choose a denomination value. The latter are between €0.01 and €0.25. In purpose, the online casino game Whale O ‘ Winnings gives you the choice to bet money that can go between €0.01 and €125.00 per spin.

Two features can be unlocked at any time with the Whale O ‘ Winnings online slot machine! The first feature is named joker and it is clearly identifiable by the head of a blue-eyed orca. It can also be called wild. Its objective during its activity will be to allow you to collect chips more easily.

As its name can let us understand, the joker will have the task of substituting icons in order to allow you to form a pay line of course paid. With Whale O ‘ winnings, the wild will have the power to replace all the icons that complement your interface. In addition to allowing you to speed up the process of obtaining random prizes, the joker will be able to deliver you a pack of chips. The latter will be influenced by its size relative to the number of times the wild will appear on your game screen.

To be more specific about this, the joker will allow you to add up to 7777 extra chips in your bankroll from the moment you see it 5 times on your interface. All positions on the reels are valid to enable this active hearth feature. Finally, this option wants to go even further in terms of its earning power. Each time you make a profit through the Orca icon, all the prizes will be multiplied by an index of 3 !

The second feature of the game Whale O ‘ winnings is heading on free spins ! The second character of this story is a dolphin and it is he will take care of you opening the doors to free spins. In order to be able to enter into this feature that promises to be very juicy in profits, you will have to at least get 3 representations of this mammal.

As for the wild, all the positions on the 5 reels are welcome to be able to make the free spins active. To the maximum either by getting 5 times the dolphin with green eyes on your screen, you will get the right to play with a number of 50 free spins ! If that wasn’t enough, this feature of the Whale O ‘ Winnings slot will take advantage of it to multiply by two the set of prizes you collect with it. 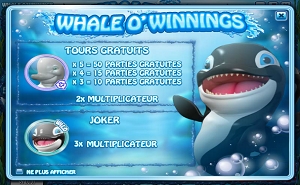 Rival Gaming powered game editor seems to be climbing the hill by proposing three-dimensional slots for many weeks. To make a little history, the first was the video slot Jolly Roger Jackpot.

Released on the 1st of February of 2015, Whale O ‘ Winnings really surprised us at the level of its graphics. The shining effects on the characters add a clear impression of reality and their respective stagings is a real success.

Compared to the proposed functions, we regret a lack of bonus game. But the Whale O ‘ Winnings slot machine still offers jokers that have the advantage of having earnings multipliers. The free spins are also not to be neglected knowing that these can reach a limit of 50 spins which is very important and in purpose the prizes are doubled. The redistribution rate is therefore suitable even if the bonus level is absent.

To conclude this opinion on the game Whale O ‘ winnings, we can say that the latter deserves to be tested by the greatest number of players. His work of realization was well thought out with a significant increase in details when triggering the two features we just quoted.