Plunge into the heart of a veritable backyard ! 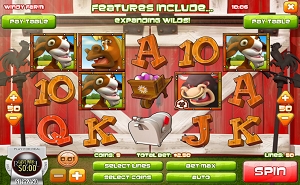 The online game publishers of Rival Gaming powered offer you on October 14, 2016 to embark you in a universe much different from what we knew until then about their creations.

With the virtual slot machine under Windy Farm this is a preview in the matter. Rival Gaming has taken the lead to learn about a new theme based on a set of 5-reels, 3 row, 50 lines where live animals constantly gravitate on a farm. A farm isolated from human contact because it may seem unreal but these animals seem to coexist together in total autonomy and without causing major turbulence.

There is no farmer on the horizon as a main protagonist but instead a nice team of animals including a horse, a pink pig, a goat, a bull and a hen. In this world where triumphs only the joy and pleasure of living together with humorous touches quite pronounced during certain moments of the game Windy Farm, other icons that we can call secondary will be there to harmonize the interface of this one-armed bandit Rival Gaming Powered . You will then be able and almost every time to cross your path of letters as well as numbers colonized by bees, an aluminum watering can, a wheelbarrow in wood filled with turnips or a horseshoe symbolizing in power the chance.

Speaking of chance in the money game Windy Farm, the latter intends to offer you 2 features whose first will focus on a wild that will in some cases figure the choice to intervene as a simple wild and in other circumstances like a wild extensible. Chance will do things right while knowing when second of this feature will open to you free games that will reach without too much difficulty a peak of 25 !

The range of bets from the Windy Farm slot ranges between £0.01 and £62.50. Windy Farm is a Rival Gaming slot machine that allows you to play with 50 line taking into account that these can be manually activated from 1 up to 50 before each new launch from you. In addition to enabling you to activate a certain number of lines, this so called free slot will give you the opportunity to put into play a coin value based between 1 and 5 which will be to graft on each of the winning line that you have previously made active S. Finally, denomination values will be at your fingertips to allow you to select one between the values of £0.01 and £0.25. Once you have set your wager level, it will be high time to set the 5 reel of the mobile Windy Farm slot machine into action.

Windy Farm is a game of chance that counts in its range of features, wilds. Substitution icons that will have a full grip on all the items on your interface. A complete power for this wild that will be able to act as a simple and extensible wild. Simple, means clearly that it will have an icon replacement power only on its initial landing surface.

In other words on the area of a single box. In other cases and this is where it will be most interesting for you when it comes to getting prices, it is when its extensible option will prove on the 5-reels of the slot machine. As with the simple wild, this other shape can show up anywhere on the reel. A feature that will act randomly and have the power to complete the entire height of a reel to increase very significantly the chances to form a pay line.

The wild option is represented by a hen that has lost all of its plumage and which seems to be surprised by its sudden arrival on the reel which it is worth to lay its egg prematurely. A staging which of course is played with ease in the tone of humor.

When you’re playing windy Farm, you’ll have to watch your game closely and be especially attentive to the icons illustrated by a bull not quite convenient. When 3 items of this animal that exceed the ton will show up on any area of the Windy Farm slot, free spins will suddenly get into operation.

The game will not be altered by its physical appearance. Only 2 displays, one above the game will count the number of free spins in progress and a second located at the bottom of the interface which will be the function of mentioning the number of chips earned collected along the way. To add significantly more chilies in the course of free spins orchestrated by the furious bull, the extendable wilds will be able to intervene. When they do, they will take advantage of their dynamic presence to double the whole of the profits of which they are the creators. 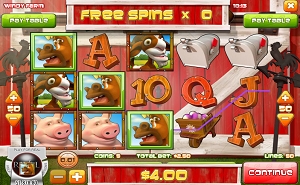 Windy Farm is in my opinion a game that has the merit of being visited by the largest number of players. We know that the toy library of Rival Gaming Powered contains many slots titles but about Windy Farm, this is a new slot machine. Never had Rival Gaming thrown himself into the water to go on a project to create a humorous game encompassed by farm animals.

For a start, I must say that the publishers of the brand have made very strong with quality graphics and many protagonists who have the advantage of being particularly well involved in the game. A fairly dynamic game that on the other hand marks a downside with a proposition of only 2 features. I find it a bit of a pity because a bonus level would have allowed to properly frame the panel of features offered to the public. On the other hand, it does not cut the Windy Farm slot to regularly redistribute prizes with its free spins which can reach a peak of 25 !

During this completely free sequence where you will be spectators at the first lodges while waiting to cash your chips, the extendable wilds will be able to join the feast to multiply by 2 all the profits of which they will be the creators. To conclude, despite its meager index of functions Windy Farm knows how to go about ensuring juicy profits in regularity.