Confront the Pharaoh to play with 15 free games ! 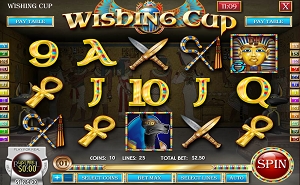 Wishing Cup is a Rival Gaming video slot that draws its pin from the game by offering you a golden chance to explore the mysterious bowels of the Egyptian pyramids. More particularly those that were a time belonged to a man reputed across the environs to be among the ruthless pharaohs.

Men who took themselves for living gods and of course to satisfy their oversized egocentricity, exploited their own people without scruples in order to put on their feet more and more voluminous pyramids. Their dream common to all this succession of Egyptian kings was that one day they could touch the sky while having their foot plants touch the burning sand of Egypt. In this perilous adventure that offers you to live the Wishing Cup online game you will be present in a secret room. A space laid out in the depths of a very ancient pyramid.

A place deprived of daylight that was once illuminated by multiple solar reflections amplified by large mirrors that exchanged between them the radiance of this fireball in order to bring a comfortable brightness for the eyes and no longer let of mystery in these places. Finally, almost since this secret room contains in it coffins that are protected on their surface by a thick layer of dust.

An index that suggests that this Chamber is no more than a mortuary space where offerings have been carefully deposited in order to facilitate access to paradise to these deceased mummified. Actions that have been going on for a long time and no one seems to have been here for quite some time.

In this room is gently noticed a piece of wall that lets see a magnificent fresco representing hybrid gods. Egyptian deities such as Osiris, Horus and Isis, which are still available as symbols in the Wishing Cup game, then allowing them to access chips payments.

Gold coins that you will be able to appropriate by activating simple wilds having a peculiarity to be able to extend on the whole height of their reel, free spins as well as a special feature to the secret passage name because, yes, the slot machine Wishing Cup is riddled with it.

The Wishing Cup online casino game comes with a construction of 5-reels, 3 rows and 25 pay lines. An opportunity at the bottom of the slot machine where there are all sorts of configuration points in order to accurately define a sum of money.

At its bet setting, the Wishing Cup game gives you the opportunity to select a denomination value available between £0.01 and £0.25. In addition to being able to influence a denomination level, you will be able to activate between 1 to 10 coins on the winning lines that you will have been willing to make active.

For simple reminder, the latter are accessible between 1 and 25. Once you have set your starting value between £0.01 and £62.50, simply launch the 5 reel of the Wishing Cup slot to know its final result opening or name at prizes through the activation of a feature where thanks to the conjugation of basic symbols.

Simple wilds will be part of the surroundings of Wishing Cup. Items that can perfectly manifest themselves on several areas of the game at the end of a rotation and have a complementary option named expandable.

A configuration that gives wings to the simple wilds allowing them to be able to climb on a reel by associating beforehand by two other simple wilds. In this context, the reel that has created a first simple wild will find itself completely colonized by the wilds that will have the effect of giving birth to an expandable wild that will have this strength to multiply your chances of making profits.

Symbolized by a grey-colored cup that lets you think of a stone fabrication, the simple wilds will be able to replace all the symbols of the game in order to help you make money. They will be able to show up on reels 1, 2, 3 and 4 in order to meet their prize redistribution objectives.

Free games are available in the heart of the Wishing Cup video slot. To penetrate this feature, the goal will be that you collect at least 3 so called scatter icons on your screen. The landing place will have absolutely no interest in allowing you to win free spins.

By getting a Pharaoh’s head 3, 4 or 5 times on your game interface, you will collect respectively 7, 10 or 15 free spins that will not fail to start immediately. In their various actions, the free spins will change the graphic configuration of the Wishing Cup casino game with a more welcoming charter compared to the main version of Wishing Cup by putting on the front of the stage the sarcophagus of an old Pharaoh.

This large, luxuriously decorated coffin will benefit from its intervention in the game to stand upright on the central reel. At his feet and on the sides of your game screen will be arranged a whole bunch of objects that will have as a common point to have been cast in gold of a rare purity.

A small special feature will have the privilege of being able to activate during the main game of Wishing Cup. This is an additional option that has the secret passage name. Represented by hieroglyphs where more precisely an eye, this icon once visible on any row and reel will be assigned through a substitution of symbol.

An icon that will appear as a flower in the spring and in a random way. Sometimes this metamorphosis opens the door to the creation of a pay line. In other cases, it will have no impact in the game. In addition, this special secret passage feature of Wishing Cup will be able to present itself in several places during the end of a spin story to amplify your chances of success in the game.

Wishing Cup is a pretty addictive game that comes complete with ease an old video slot Rival to the title Cleopatra’s Coins. The graphics are far from unpleasant but far from being at the height of some other variants of 5-reels of this brand of production of online gambling on the internet. The soundtrack gradually plunges us into the uncertainty of the game with the gradual help of its rather dark graphics which only maintain this general atmosphere rather filled with uncertainties.

The features are in many ways to offer regular prices with several different way of working so that you can identify the context of the game as you see it. Wishing Cup is among the most profitable Rival Gaming video slot of the moment with this force that comes to look progressively during the passage of free spins that offer this opportunity to play with a maximum of 15 free spins !