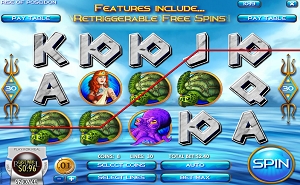 Rise of Poseidon is a Rival Gaming Powered slot machine that has 5 reels and an availability of 30 lines activables.

As its title can demonstrate to us without great difficulties, Rise of Poseidon is allied with an aquatic theme that is maintained by the god of the Seas and the Oceans. His name came straight from Greek mythology is Poseidon. A character with an incredible charisma who shows his musculature and conceals his square face with large hair and a grizzled beard which counts the months in maturity.

This masterpiece made with talent by the publishers of the brand Rival Gaming Powered offers you to embark in an adventure that is probably going to mark your memory. The colours are bright with a soundtrack worthy like the greatest Hollywood adventure movies.

The items of the Rise of Poseidon slot machine are multiple and share a common theme to demonstrate that the places you will visit on this body of water are full of traps. You will need to be cautious by paying attention where you are going. In this story prevention is better than cure!

The icons that are responsible for dressing the 5 reels of the online casino game Rise of Poseidon, are a white shark, a dolphin, a giant octopus, a hundred-years-old turtle, a fighting ship with large fortifications, Poseidon holding his trident against his muscular chest and other icons that will aim to integrate you into the content of the game Rise of Poseidon.

Regarding the way to make money, the video slot Rise of Poseidon offers wilds simples, earning multipliers and a sequence where free spins will take place to reach in their number and an appearance of stretch wilds particularly electrics.

Rise of Poseidon is a no-download slot machine that has 5 reels and 30 pay lines that you can adjust as you like from 1 to 30 via the line selection button. You will also have the opportunity to activate coins on the lines your activate lines. These coins values will be between 1 to 10 knowing that value 1 is activated by default that allows the 5 reels to start. Then, denomination values could be used as well. These latter are from €0.01 to €0.25, and to vary these values, you will only have to use the buttons more or less at the bottom of the naming value selection area. At the end of this enumeration of bet setting options the online game Rise of Poseidon will leave you the choice to play money between €0.01 and €75.00.

Rise of Poseidon offers in its main game a feature that gives you the ultimate chance for multiplying all your profits generated following the end of a rotation. This feature has the name of joker. This is a wild simple which is represented by the portrait of Poseidon and in its best light with a degree of narcissism that many people will have trouble to overtake.

This substitution icon can intervene and in any case exercise its power on the reels 1, 2 and 3 and replace any icons it finds on its way. Once she creates a pay line, it will allow you to first collect your profits and then multiply them by an index of x2.

As a note, the wild can very well get along with several other jokers during the end of a spin. Therefore, it will not be rare for you in this specific case to be able to trigger big win exceeding most of the time thousands of chips.

Free spins will be able to come at every moment of your sequence of play, up to a value of 36, the free spins of the Rise of Poseidon slot machine will have a great power on your interface game.

At first in the main game, the game of Rise of Poseidon offers a magnificent panoramic view of the sea with distant compacted clouds giving the illusion of a massive snowy mountainous. The atmosphere is such that we clearly feel that the interface of the game is floating on the surface of the water and is unequalled lightness. The sea is so quiet that we literally feel like a lake. When activating free spins by collecting anywhere on the reels 3 icons of the god of the waters Poseidon, the short of events will know a radical change.

The anger of Poseidon will fall on the game, bringing a stormy climate with lightning here and there. The sea will react accordingly with waves of several meters high, leaving little hope for the slot machine to protect its 5 reels from these unchained waters. The atmosphere will be particularly electrifying and every second will be a sign of luck and avoid crossing the world of the dead.

The soundtrack will also play a major role during your free spins session with a much more accentuated sound allowing to increase the dose of adrenaline. During this trip where nothing will be safe, the wilds will intervene. They will become extensibles allowing you to collect money faster than in the main game. They will still be able to multiply your earnings at the end of the session with the same multiplication index that is set to a value of x2. 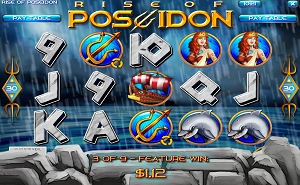 Rise of Poseidon is one of my favourite game for Rival Gaming Powered provider. The three-dimensional graphics of this no-download 50 line game is a pure success.

There is no doubt about it. If you like games with aquatic connotations where the dominant colour is blue, I recommend you in this part to discover for free and with no-download Whale O’Winning, Lost Secret Of Atlantis. Two games that are for me essential titles in the Rival Gaming Powered games toy library.

Others than its graphics and soundtrack that are a real success, Rise of Poseidon is a game that at first sight does not look like when you take a few moment to look its winning table. It is true that 2 features is really little. Many will be o my opinion saying this.

It is better to preserve the quality than the quantity. This is a spike since Rise of Poseidon is also from this opinion. The jokers are wreaking with their ability to double the money earned but what is more interesting in this story is the number of free spins that you can have in each moment.

The possibility to play a maximum of 36 free spins! But it is not the strongest game on this side, Scary Rich 3 that offers to play with its 5 reels and you can activate up to 666 free spins. Yes, I am not mistaken.

To finalize in one sentence, the video slot Rise of Poseidon offers fun contents that strives at every step and offers juicy prizes that are unveiled only at the last moment.