Home » Blog » All Games » For Love and Money

For Love and Money

A writer’s imagination can sometimes be overwhelming ! 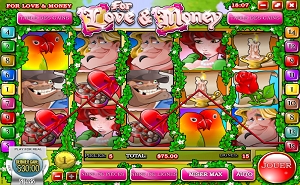 For Love and Money is a money game that has 5 reels and 15 pay lines. This slot machine signed Rival Gaming trains its players in a world full of love and protection. A particularly long cinematography recounts in details the story of For Love and Money. Regarding this adventure that you will put into action through two features, these one is orchestrated by a writer bursting of imagination !

Initially, he will point out to you that he has great difficulty writing his first lines in his notebook. As he goes to see and observe carefully, he will be able to relate with precision what he will live to ultimately build a true story. This 15 lines money game For Love and Money takes place in a natural Park where the visitors come and go by all kinds of winding paths.

You will be able to see for a short time an old couple but the writer who is sitting at the foot of an old oak tree will be attracted by a young woman walking alone. The latter releases the purity and sweetness and the ideas of the writer will be added slowly in his mind. She stands by a rose bush and despite the ban, she will pick a rose to smell. You will tell me all of this is charming but here is a disruptive element that will break this quiet atmosphere.

Two men of a repulsive physique will take advantage of the weakness of this young woman for trying to steal her necklace of white pearls They will not linger longer and perform what they had planned for many minutes behind the bushes. Bad luck for them and good luck for this lovelylady ! A third man totally against of the thoughts of these two hooligans will intervene during this event may glorious. It is with fists and feet that he will knocked these two unscrupulous men.

The girl will will suddenly fall under the spell of her defender with a particularly generous musculature. No need for her to tell him that he is not indifferent to her eyes. His face will start to blush and her eyesget wet and slowly love will born between them.

Our writer can now say about his next novel and something suggests us the opportunity to win prizes with For Love and Money pretty importants. This is far from being necessary because this 15 lines money game reserve to its players a number of two features that refers wilds of substitution as well as free spins !

For Love and Money is a Rival Gaming money game adapted to all type of players. The available betting scale is quite large, from €0.01 to €75.00. In order to set up a specific bet, For love and Money makes available to its players two settings. The first is to fix between 1 to 5 coins on the active lines while knowing that these are from 1 to 15. Once this step is done, values of denomination can also be influenced between €0.01 and €1.00.

The first feature of For love and Money focuses on wilds. You will be able to identify them by the illustration of the writer who is still looking for ideas to write his next novel. As you can see, the inspiration will come to him slowly. Whatever it is, the wild on his side will not be delayed longer than that. It will help you to do a pay line and in addition the one that is able to offer you the maximum prizes.

The joker will be able to intervene at several places during the same rotation what will have for principle to improve your chances of achieving a victory. As if that were not enough, the wild multiplies x2 all the gains concerning it.

Free spins are present and you will be able to win 10 ! Before you can access this feature of the 20 lines money game For Love and Money, there you will have to gather on your interface 3 icons of a pink angel. The latter desesperatly tries to extend her bow to send an arrow towards the two agressors of the young woman. By lack of strength, he will never succeed in realizing his act. However, it will allow you to access free spins. As for the wild, these will have a gain multiplied x3. 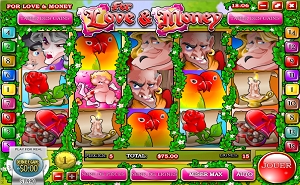 For Love and Money is a 5 reels and 15 lines money game that we have greatly appreciated in terms of his graphics and his cinematography which doesn’t fail in details with this writer in search of inspiration. The different symbols that illustrate the interface of the slot machines are particularly well done with a good game of bright colours. About the redistribution of the gains, the game Rival Gaming For Love and Money is quite generous even if we would have appreciated the integration of a bonus game . That would have allowed to add a little more spice to the game but this restricted side of the slot machine doesn’t impute its originality.

Finally, For Love and Money is a good quality money game and playing it is not a wasted time, on the contrary.