Will the Sheriff succeed in making order in the dark alleys of Smoking Gun™? 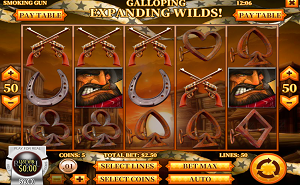 On March the 25th of 2019 the provider Rival Gaming introduced us to its slot machine with the theme of the wild west! A wild and different free spins will help us in our path to wealth. A settlement of account that will have us pending until the time of the result… All the symbols are there the bandits, the sheriff, the girl of the saloon, the whisky, the hat, the short star they are all at the appointment!

In the town of OK City things are not going well! The bandits have given themselves an appointment to eliminate their worst enemy: the sheriff! And it felt in the air. The wind was blowing hard and it was very cold. The saloon was full and Missy the waitress was very nervous: these people who had just entered did not have a good head, but she has to serve them it’s her job.

The Sheriff has just made his entrance: silence has been done! No one moves or we hear anyone talk, it’s like the world just stopped. The bandit with the moustache (paying symbol of Smoking Gun™) calls on the sheriff and orders him to come out! They have to settle their accounts! The sheriff can’t wait to react, he grabs his gun! But the guy with the moustache had just taken the waitress in hostage! It’s no laugh at OK City!

The Sheriff comes out of the saloon and behind him everyone. The three bandits (high symbols of Smoking Gun™) and the waitress who had been taken by the guy of the moustache. He wants a duel with the sheriff and he’s going to have it! They all get out and the sheriff and the man of the moustache were in front of each other. The silence is terrible! They count up to 5 and… horror! We’re seeing the sheriff fall! This is not possible he was the best shooter in the county!

Unfortunately he is the one who died! No one understands! May if it was necessary to surrender to the facts: it is he who died not the bandit. After killing the sheriff and robbing the Bank they went to other horizons. They had explained that the sheriff had caught them and made them locked up in another city jail for years.

The provider Rival Gaming offered us on March the 25th of 2019 a slot machine of 5 reels and 3 rows in the middle of the wild west with bandits, a sheriff, a girl of saloon… We take advantage of the expanding wilds, the exploding sticky wilds, the ricochet drop icons and the galloping expanding wilds that will lead us through the path of a settlement between the good and the bads.

A winning will occur when the corresponding symbols are displayed on an active line. The symbols will appear consecutively starting from the left side. The payment will be determined by how many symbols are found and by the values displayed in the pay table. The wild symbol will replace any symbol to form a winning line when possible.

Expanding wilds extend to fill the entire reel when it is possible to form new victories, but not including scatter winnings. All the victories are multiplied by the coins waged by lines except the scatters. Only the highest winnings will be paid per selected line.

The Ricochet drop feature will be activated if 3 or more symbols wilds represented by a revolver arise on the reels. The drop icons will disappear and the symbols above will fall to fill the empty spaces. Symbols cannot pay more than once per sequence and the highest payout will be taken into account.

The galloping expanding wild feature will trigger if 3 or more wild symbols represented by a horse’s head will be on the interface. The expanding wilds will extend on the entire reel anytime when it will be possible to form new pay lines, but that will not include the scatter victories. 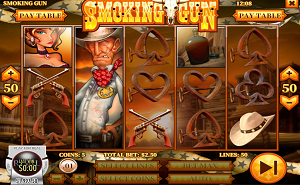 On March the 25th of 2019 the new Smoking Gun™ slot was released; by the provider Rival Gaming with the theme of the wild west. A very fashionable theme between provider especially its recent times with titles like Tomstone™ or Hot Nudge™ Nolimit City, Gunslinger™ and Golden Colts™ of the provider Play’n Go. Wilds and various free spins will be the features and want to help us cross the path of wealth.

It can be said that practically all the symbology of the wild west there is represented the irons that mark the beasts, the star of the sheriff, the revolvers, the bandits etc… No originality, we have wilds, free spins and re-spins. Not much choice. In addition the AutoPlay mode is only available in real mode, it is an election. During the free spins we choose our bandit that makes a little involve the player.

The graphic charter and the soundtrack go well together everything is coordinated, the theme being well represented, but we do a little overdose of the theme of the wild west which probably will have its fans like any theme. Bets start at €0.01, we bet 10 coins per line and there are 50 lines. That is to say that the total value of bets oscillate between €5 and €125. There are not too many betting ranks but it can fit.

Regarding the casino game Smoking Gun™, there is no data on the return to the player but the volatility is average, we have to be a little patient to be able to discover the features, which is not frankly great for the player. He prefers to see them activate quickly but here it is not the case. Nor can we configure not much, the lines, the parts, the sound the speed but no more.