Free spins in an emerald garden ! 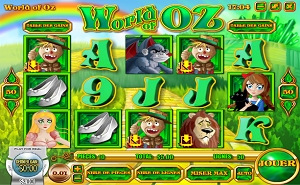 Added on Thursday, June 3th, 2015 at the end of the day at all the online casino lobby of the Rival Gaming Powered brand, the latest creation of this publisher what hasn’t anymore secrets for us, following several months of work present World of Oz. This game is available from the slot machines section of 5-reels and 50 pay lines. This is already one of the many advantages that this 3 dimensional slot has to offer.

The content of World of Oz is quite disturbing. Besides, it jumps to the eyes from the first seconds of connection. The dominant color is based on different shades of green. The online game World of Oz seems to want to plunge players into a world that is quite different from the one we all know and to step up to this, the graphic details are not lacking. The background of this 50l ine slot machine leaves glimpses of the fields and cultures that stretch across many hills. A path built of yellowish cobblestones furrows between these different lands to reach a place that we can call bright with again and again this emerald color.

This place is kept by a strange appearance. His goal will be to scare away those who will have an ambition to venture a little too close to this unknown territory. It does not do this by chance or pure pleasure because in reality it protects an area that is full of wealths of all kinds. This emerald garden that will be constantly visible in the top right of your interface will play a big role during the stages of the game which are among other things animated by free spins and gain multipliers.

On the side of this intriguing territory that takes advantage of it to illuminate the sky continuously with green rays of remarkable power is something well known to humans. A little hint… This phenomenon is often announced at the end of a warm and rainy weather with the sun that is never far from the show. We can clearly guess that it is a rainbow. This one will remain frozen in time and he’ll take advantage of it to break this greenish color by red, green apple and dark blue colors. As we wish to let him think through our writings, the world of World of Oz is very different from that of the Earth.

The ambient scenery is already quite disturbing like that, but the representations of the slot machine are also. During your different games, you will be able to activate pay lines through a lion with a sad face, shoes, a scarecrow, an evil monkey with devil wings, and many other representations with no logic point among them.

In fact, World Of Oz is a really weird game that seems to want to hide something. During this adventure which on the other hand promises to be activated by many features, you will be able to play with sums of money that are between £0.01 and £125.00. To allow you to set a specific bet value, the World of Oz online casino game offers room values that can be selected between 1 and 10. You will also have the advantage of being able to select a denomination value that can reach a maximum value of £0.25. Of course, and as we had noted previously, the 50 lines in this game of money can be manually activated from 1 to 50 and this before each new launch.

The description of the features of the World of OZ game is due to its special features, which bears the name of (move icons). Three representations will be responsible for activating this option. These are clearly icons of the scarecrow, the iron man and the sad lion. When one of these illustrations will show up 3 times on a pay line then the feature will be activated.

Its first objective will be to explode the trigger icons to let those present just above to complete the empty space. It is an avalanche feature, cascade of symbols (Thumbling Reels) which will aim to form a new combination of symbols to finally try to deliver prizes. Note that this feature can only be used once. In case of gain, there will be no new avalanche of symbols. The game will need to be restarted using the button (play).

In addition to allowing you to have fun with a Thumbling Reels feature, these 3 representations will be able to offer you chips packs that will be growing up against the number of times the illustration will be visible on your interface. For example, with the lion you will be quite possible to win up to 300 coins in case you manage to collect it 5 times on your screen.

Now it’s time to talk about the free spins of the World of Oz game of chance. This episode of the game will unfold exactly where emeralds illuminate the sky so much that we can no longer see it. As we remarked during the introduction of this winning table, the places are well ranked by a strange man. The latter is bald and its skin and as a coincidence of green color. Can this be because of the incessant radiation of these thousands of gems? This being in a frozen look and we really don’t know what he’s got behind his head. No expression on the face. In front of this, questions can be several.

This is not finished because another feature can then add its spices during the free emerald rotations. These are the wilds, that will have a multiplication power of x10! This option of the wild can also be present during the game called normal but with less power that will be able to multiply all the prizes obtained by x5. By the way, this remains largely correct. The wild feature of the World of Oz online game is represented by the face of a witch, who seems to have a grudge against you. No secrets will be kept at this level. You just have to look at your symbol so you can get an idea of the thing.

The game World of OZ is quite strange in face of its design with illustrations that not absolutely no logic between them. It even makes it absurd. A lion with an iron man and a young girl holding a black cat in her arms. We couldn’t understand a logic with such representations. The background is also interrogative with this dominant green color.

This place illuminated by immense emeralds planted in the ground and covering the white clouds of the sky. Not far from there, it is quite another thing that is played. The sky is represented in a way that is more normal with the option of a rainbow. Very special this slot machine of 50 lines of the Rival Gaming brand. The publishers have really surprised us with this title and we did not expect such a realization at all. Everything that was stated from the beginning of this opinion on the game of World of Oz is only on a personal basis. Some players will love the design of World of Oz and others would flee as quickly as they arrived. This is just a matter of taste.

From the pay side, the World of OZ silver game deserves our applause. This variant offers lots of features with gain multipliers that can go up to a maximum of x10. At the outset, the number of free spins is quite substantial with the possibility of being able to accumulate others along the way. The avalanche feature also adds a good touch of originality to the different ways of earning money with the 5-reels and 50 pay lines. With its very specific content, we invite all the fans of online games Rival Gaming to discover for free and with no download the slot World of Oz from the site of en.casino-rival.com.