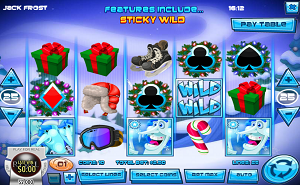 The Rival Gaming powered provider takes us for a walk under the snow with its no-download slot machine Jack Frost™. Our characters will train us in a gift race through the mountain and its features: Free spins, Ice Block Bonus, Drop icons, its wilds and sticky wilds to win us the big amount.

It doesn’t miss many days before the Christmas festivities and Jack Frost has to go on tour with his band. His wife and son are not really happy but they know that these concerts can revive his career. In addition, Jack promised to be there for Christmas Eve and to spend the holidays with them, and generally he never missed his promises.

He offers a pen to his son with an inscription: The word of a Frost is sacred! And he tells him to always keep that pen close to him, he’ll make him company while he’s traveling. Lack of luck when Jack came home under a terrible snowstorm he’s in a car accident and he’s dying on the place. His son and wife collapse psychologically. At the funeral of Jack comes a lot of people because he was very appreciated.

But Jack could not miss his word and he reincarnated in the pen he had offered to his son. But how to let him know that he was there without scaring him of course… He began writing on a paper the phase that he had written on the pen. The teenager’s tears cease to flow, he has just realized that his father is there.

But how can I say it without everyone taking it for a madman? His father warned him, especially not to tell anyone, and his mother then? How would he do to explain it to him. Jack then recalled the letters he had written to him when they were engaged and he remembers perfectly one of them. He then writes a passage of the letter and asks him to go check in the box (that of the game Jack Frost™).

Skeptical but no more than seeing a pen write all alone she will look in the box and actually the passage of the letter where he asked her to marry her was identical. It was him, his Jack, who had reincarnated in the pen. The mother and the son did not believe their eyes. Jack had not missed his promise and he was well with them to spend the Christmas parties with his family.

The wild symbol represented by the word wild written in blue will replace any other symbol to form a winning line when it is possible. The sticky wilds (the word wild in color red-orange) will appear during free spins. They will remain on the screen and will trigger re-spins if they are part of a win.

The Ice Block Bonus will activate when 3 or more Jack Frost symbols fall on the reels. Ice blocks must be melted to earn coins or free spins. The feature of Drop Icons appears during the basic game. Any Drop icons will trigger the feature. The Drop icons that will trigger the win will disappear and the symbols above will fall to fill the empty spaces. Symbols cannot pay more than once during a sequence.

You will win when the corresponding symbols are displayed in an active pay line. The symbols must appear consecutively starting with the leftmost reel. The payment will be determined by how many symbols are out and by the values displayed on this payout table. 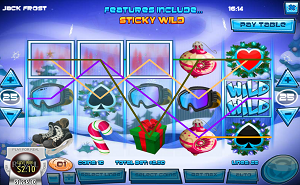 The Rival Gaming Powered provider Jack Frost™ slot released in December 2018 has 5 reels, 3 rows and up to 25 pay lines with a battle between winter and its symbols and summer and its symbols. The basic game is well inked in the winter but when you trigger the free spins it’s summer coming and that settles during the free rides, which is quite original.

On the side of RTP, there is not joy only a 94.26% and a rather average volatility which is not frankly brilliant, the game to be released in December 2018 is well below other games and this is not going to please the players. We have to wait not bad to trigger the free spins, it gets tired a little, we have no feature to buy so we have to wait patiently that it happens, and patience is not the strong of some players. They prefer the features easier to tame.

One can choose between 1 and 25 active lines to play and stakes values between £0.01 and £0.25 euro which makes us a total bet of £62.5 which is good for beginners players or who do not have a wallet too inflated. On the other hand, for those who have no worries on this side and who like to bet hard it is not frankly their game. Moreover the bankroll that we are offered in free mode is £2000 not huge that either!

Another negative remark for this game, AutoPlay is only available in pay mode, this is not a good idea. I think there are a lot of players who like this option and especially try it in free mode before playing in real mode and it’s not a good idea that makes you think a bit of a scam, but hey it’s the choice of Rival Gaming simply.

On the jackpot side, the maximum that can be won is 500 times the wager is 31,250 if we bet £62.5 (£0.25 and on the 25 active lines), it’s not the joy either! No big attractive earnings actually. What the players are looking for are the thrills and the hope of being able to win an incredibly high sum but here it is not the case.

A good point for the Jack Frost™ game with his interface original that has two facets. The winter in which one is plunged from the start with its snowflakes falling and then when (finally) we fall on the free spins the summer arrives with all the paying symbols that change, ice skates for flip flops, goggles for goggles of sunshine, the fir ball for the cocktail in a coconut,… It can be said that it’s original just like when the ice cubes melt because of a flame it’s not bad either but not huge for the fierce competition that is manifest between the online casino provider and the new slot machines placed on the market.