Home » Blog » All Games » For Love and Money

A slightly kamikaze frog on the edges ! 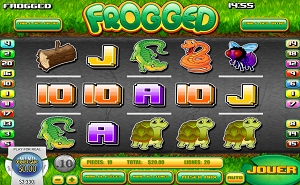 Rival Gaming adds to its already very substantial toy library an umpteenth slot machine of 5 reels and 20 pay lines. An online casino game that focuses on the animal theme as is the case for many other games in the Rival range Gaming.

In the distant and near past, we had for example added video slot machines like Dog Pound Dollars or Panda Party. But today is another day. Not only Frogged is an online game inspired in animals of all kinds, aquatic or terrestrial, but with a slight tone of humour.

During this adventure, which promises to be particularly dangerous for the destiny of a frog, the players who want to discover Rival Gaming’s Frogged video slot will have to be for the first moments of the game in the green and sticky skin of a frog. A little being harmless who is unlikely to be aware of the danger that gravitates around him.

To see the cinematography presentation, this frog makes his life without worrying about anything or even death. The joy of living goes from pool to pool in the meadow and sometimes it crosses the highway at rush hour to help it change radically. To be there to advance on this hot tar by this timeof summer by crossing fingers for not ending like a crepe under the weight of an engine vehicle tyre.

Frogged is a Rival Gaming slot machine based on the theme of humour. Users of this virtual slot will enjoy simple graphics full of colours. The interface in the main game is in the form of a 3-way highway and where traffic is very dense. Obviously nothing seems to frighten this frog in this world. Tobe as insensitive to the various potential threats of her daily life, she must probably live in a parallel world that completely immunes it from the fear of dying.

During her journey, she will meet different icons very significant of the danger for her as cars, trucks and even bulldozer. As features, the players of the Frogged’s game will be able to enjoy playing with wilds that will clear a passage so that the frog can cross this fast lane without major risk. In this line will be available free spins that in a moment of madness will be able to unlock new free spins !

In terms of its range of bets, Frogged is a virtual casino game that opens to all players. Yes, indeed, because it is possible to be entertained and to access at the same time all Frogged game options by launching its 5 reels from €0.01. For those who want to know the true strength of redistribution gains of this Rival Gaming title, they can go up to a limit of €50.00.

A maximum bet amount more than correct, knowing that it will be possible to set a bet through a few adjustment points. Frogged is a 20 lines slot machine and these can be activated manually between 1 and 20. The second setting that can be approached focuses on denomination values between €0.01 and €0.25. And finally the third point focuses on a coin based between 1 and 10 that graft on the winning lines activated.

Now it is the time to focus on the features available to break the barrack at the level of redistribution. Discover them also to know if they have an interesting potential to define themselves as a profitable in the long term. The first feature Frogged money game is in the form of a wild. This is a main character who will charge to represent better all facets of this function.

The joker of the Frogged virtual slot machine can show up in more than one place during the process of a rotation. This is already a good thing taking into account that his main goal will be to act as substitute for symbols. By the way, the wilds are going perfectly well do their job because they will be able to replace any icons present in the interface of the online game Frogged !

A boon that doesn’t stop in such a good way because the wilds have the function expandable. A complementary option to the jokers that allow them to extend over the entire height of their landing gear and maximize their action powers in the game !

A second and latest feature is topical. These are clearly free spins which can be activated from the moment that 3 bulldozers are present anywhere on the reels. An imposing construction machine that will benefit in addition to its passage with 7 free spins to deliver in the bankroll of the players, lots of chips more or less consistent.

This free spin feature in English has 2 unwind phases. The first will run with the same graphic presentation as in the main game content, but in the second, the ambient décor will evolve very clearly. The bitumen will be replaced by a watercourse fast hence the name of this sub-feature River Rapid. The icons will change pace for represent animal space like turtles, snakes or insects like mosses repulsive by their physics. During this passage of the game it will be necessary to obtain again 3 bulldozers.

During its operation, the 7 free spins activated by the River Rapids function will be able to welcome frog wilds. These will have an additional peculiarity with respect to the main game. Once present in the interface, they will stick to remain displayed on the screen despite the new free spins. An opportunity to be able to earn more with doubled prizes and increase your chances to get free spins again ! 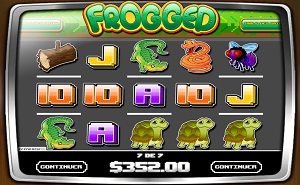 Frogged is a video slot that is very funny to browse. The graphics are pretty treated with a couple of features that is a real carnage at the level of redistribution of gain. It is not very difficult to obtain profits with a game of this type. The wild has all the options to allow the players who will come face to face with him to know big winnings on all the reels !

Free spins are far from lazy when it comes to giving prizes and at level suitable. Moreover, the earnings obtained are doubled at the end of the session, knowing that the luck to enter the extra free spins are high. From experience, during our test without downloading the Frogged slot machine, we managed to get into the features in less than 30 spins.

According to the general opinion of the opinion of the administration of the site en.casino-rival.com, the money game Frogged deserves the attention. Its graphic charter is elegant with a rythmic soundtrack, lower functions but very powerful in the generosity they can leave through.