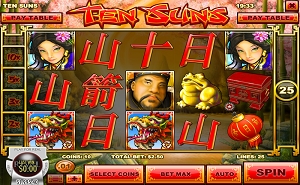 Rival Gaming Powered us had travelled a short time ago and if my memory is still good on the 8th of August of 2015 by letting us share his latest creation Panda Party available with no-download here. An online casino game that like the one that is going to be presented today under the title of Ten Suns focuses on the theme of Asia.

Unlike Panda Party, which has some similarities with the slot machine Ten Suns built of 5 reels, 3 rows and 25 pay lines, the latter will not be intended to deploy its reels in Japanese land but rather on the Asian continent. More precisely in China where the decorations of the video slot Ten Suns have an irresistible charm with a rich plume of bright colors that will undoubtedly crack more than one with within its reach the graphics leaving dreamy the greatest poets.

Stimulated by a very welcoming and particularly relaxing melody, this soundtrack punctuated by multiple musical instruments will be upset at certain times of your gaming session, when you come across features ! In terms of animations and reversal of situations, you will be served! In terms of having a good time in the company of relatively surprising events in their respective operations, and by not depriving themselves in any way to offer a most interesting compensation profile.

Regardless of the level of your injection before you meet an option of the game online Ten Suns, you will be able to cross your path drawn in a splendid landscape. Quite peculiar wilds in their mode of operation and style of remuneration but also free parts leaning to a special icon Drop. A third function with the role of giving you this chance and good heart to activate a special feature that is to talk to you with a game click me !

With the support of this cocktail of features, the Ten Suns online casino game promises to enjoy a lot of victories seasoned with an explosive wage rate !

Regarding its range of bets, this online slot allows you to access all the features that a Rival Gaming powered slot machine is able to present to its audience. That is, to be able to activate the 25 lines manually allowing you to play between 1 to 25 pay lines before each rotation of the 5 reels of the one-armed bandit.

To have access to the number of coins you want to fix on each active line and in this case, for the setting of Ten Suns, you will be able to graft between 1 to 10 coins per line. Finally, this opportunity to be able to select a denomination value that for the game of Ten Suns are available between €0.01 and €0.25.

For the purpose of these terse explanations on the principle of operation of the range of bets of the slot machine Ten Suns, it will be possible before each new launch to play between €0.01 and €62.50.

If you don’t mind, let’s get into the feature description by letting the wilds of this Rival Gaming one-armed bandit entry. These stretchy wilds or jokers, no matter what definition you use it is perfect, are represented by the face of a man who has gained a formidable experience and both an overflowing passion for mastering to perfection to shoot at the bow.

A kind of Chinese Robin Hood where none of his targets escapes him. It is better not to be in his line of sight at the risk of having very bad buttocks. I am joking of course, but a touch of humor does not hurt and we are here to play and enjoy the slot machine Ten Suns in its confection and its peculiarities to deliver torrents of chips.

These wilds will be able to interact in groups to colonize the whole height of a reel. In the jargon of online casinos, we call this kind of feature widespread a wild stretch. But what is even more advantageous in the working way of this option is that these jokers can very well extend also on the right as on the left until touching one end of the interface once a simple wild presented randomly on a reel from the Ten Suns slot machine.

These jokers determined to occupy the vast territory occupied by the reels will be able to appear on reels 2, 3 and 4. Reels that will allow them to have an efficiency in their work to transform lines by replacement works of winning symbols in order to make them pay.

A special feature that proudly bears the name of Click Me (Treasure Chest Pick’n click Bonus) rode around. You will be able to notice it without any worries since the latter is identifiable by a chest made of precious wood.

Inside it hides many mysteries in terms of remuneration. To elucidate this riddle, you will have to collect on your screen at least 3 times this type of item. When it makes sense in your Ten Suns game session, this one will clearly ask you to select a safe that is visible on your screen. This action taken from any part by the action of your mouse will have the effect of delivering you tokens that will hasten to join your bankroll.

I kept the best for the end according to my opinion. The third feature will be to put on the front of the stage free spins ! In other word, free spins that will have this strength to reach in its top up to 10 free spins ! Rather not bad especially since in this free level, changes are going to take place.

Of course, at the beginning the graphics will be designed to lead you a little higher at the edge of a dense forest composed mainly of bamboos. No panda family on the horizon but on the other hand what is certain, a new way to raise funds with the intervention of an option called Tumbling Reels !

During this short time of free game, the reels will have evaporated to give way to an avalanche of icons. In addition, a new item (Drop icon) will be present and it will be the function of exploding icons along the way to create empty spaces that require to be filled immediately by other descents of symbols (Re-Spin).

During this phase, the game will offer a free spin with the key to this significant probability of meeting a victory. All in a completely free game frame that will have this opportunity to be lengthened by a few moments in the event that this famous new icon Drop fills to perfection its mission on the reels. By getting 3, 4 or 5 times the mask of a dragon referring to Asian culture, you will be able to win respectively 5, 7 or 10 free spins as well as all the winnings resulting therefrom ! 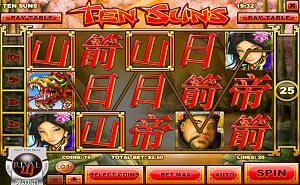 Ten Suns is one of my favorite casino games ! I take my hat off and I give it one of the best ratings. No ingredient is noted for absent in this variant. Therefore, this game of money offers players a good reason to be present in front of its colorful interface that features a gaggle of objects referring mainly to Asia.

For example, lanterns, Chinese letters, trees and flowers typical of this place of the world, pierced coins leaving the passage to a red string to slip into their central hole in order to bind them together, a samurai, a Young woman with an emerald look and at the same time bewitching to admire her too long…

A graphic charter that gives off something unique and offers an indescribable pleasure for the eyes. The Ten Suns Silver game is an artistic painting that is literally full of details and nothing is left to chance.

On the features side, the game does not suffer from any deficiency to offer in a regular rate of prizes worthy of the name. The free spins do a great job with this intervention of the Drop icon and this new way of playing with the tumbling Reel feature, that is not known in other games with reels under the intellectual property of Rival Gaming Powered.

Ten Suns is therefore in my humble opinion an online game not to be missed and that under no pretext. This one-armed bandit comes to enrich the toy library of the Rival Gaming developer with its Asian theme that makes it simply unique !